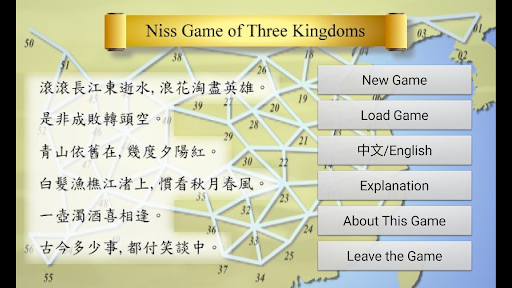 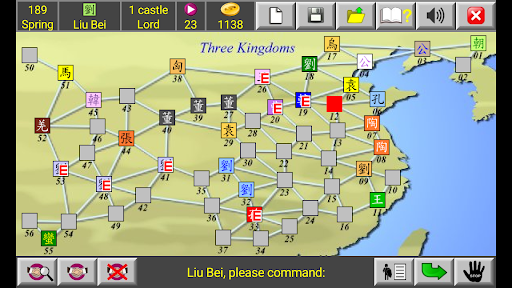 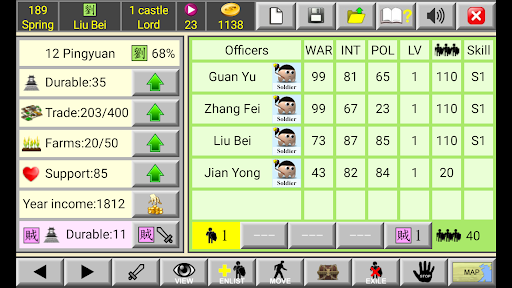 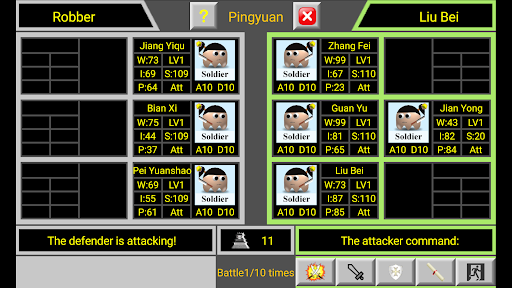 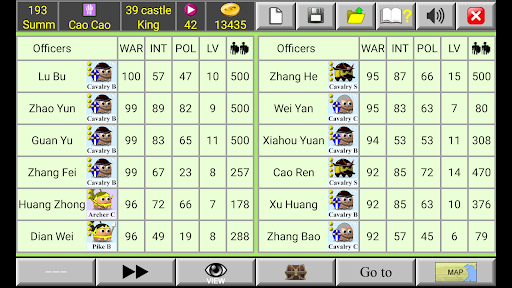 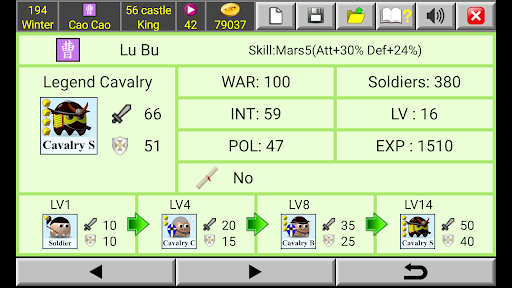 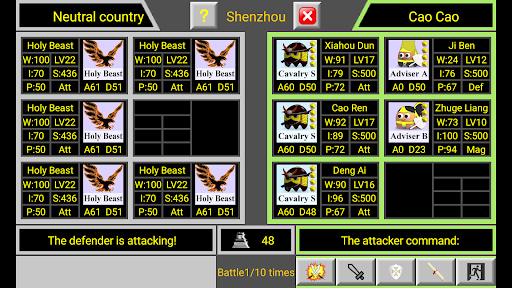 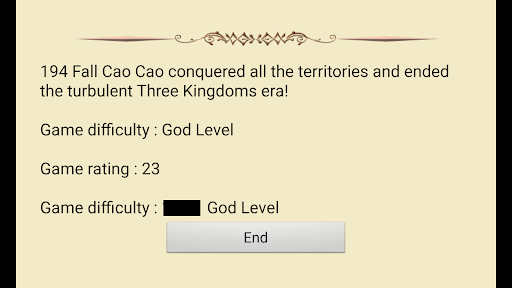 About Niss Game of Three Kingdoms

This is a offline strategy game with the background of "Three Kingdoms of China".

Each King has different Officers/Troops/Castle, Players can choose any King to start the game, the more challenging the country, the higher the score base for passing the game.

If you choose a neutral country, you will start the game as a newly created King.

*Cultivate Officer, accumulate experience and improve the capabilities of the troops.

*Make good use of the Diplomatic Alliance and reduce the enemy on the back.

*Grasp the timing, conquer neighboring countries at the right time, and complete the unified hegemony!

{Internal affairs}
Increase Castle defense: Increase the durability of the castle when attacked.

Increase Farms: Increase the capital income of the autumn harvest and increase the source of conscription.

Increase Support:Increase the rule of the lord.

Levy: Funds can be collected temporarily, but the Trade/Farms/Support of the place will decline.

Suppress Robbers: Robbers occupy 20% of the territory. Only by eliminating the bandits can we completely occupy the territory. The thief will become a free Officers.

The implementation of internal directives requires action points, which depend on {King Political Ability} and {Country Level}.Country level up, action up 6 points.

{Troop}
Upgrade: Officer execute internal orders or participate in battles, and can gain experience points, which can be upgraded 1 level every 100 points (troops can increase attack or defense).Officer with Skills and Tactics will also upgrade their Skills and Tactics when their troops are upgraded to 3 or 4 stars.

Automatic Training: The Officer who have not acted, the system will automatically train and increase the experience value by 10 points in the next round.

Offense: By executing the {Offense} command, the troops of both parties will attack. The output of melee units in the back row will be halved.

Defense: The troop switches to the defense state.

Tactics: This troop uses the tactics. Only staff officers and special skill officers can use tactics.

Retreat: The attacking or defending party can execute the {Retreat} command to retreat the all troops.

When the field attacker wins, he will enter the siege battle.

Encirclement: Execution of the {Encirclement} instruction costs money. When the city defense drops to 0, the attacker can occupy the area.

Assault: To execute the {Assault} command, no cost is required, and the effect of the siege will be doubled, but the troops will be injured or killed.

{Rating after completing the game}
After the game passes, the system will give a score to the unified process.
Scoring elements: Use rounds, Initial power points, Game difficulty.
Get 100% free wiki apk applications, games and tools or search more apps on on www.wikiapk.com

Enjoy using Niss Game of Three Kingdoms on your Android! If you find any bugs, mistakes or outdated links, simply contact us. We will fix it immediately.